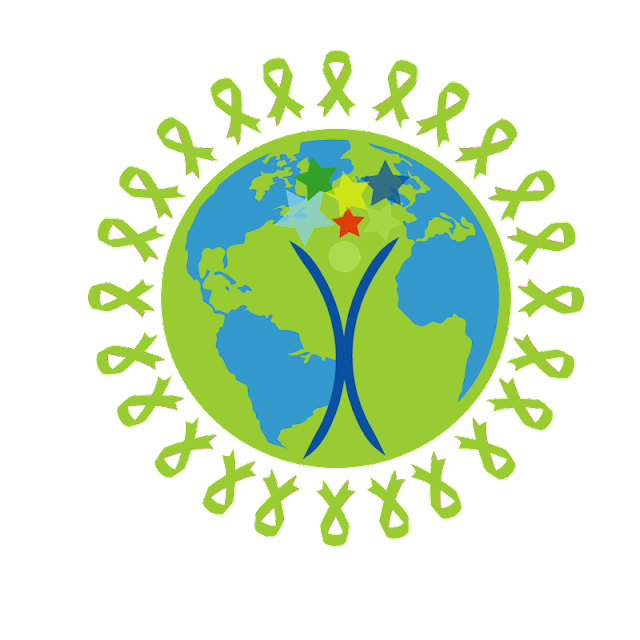 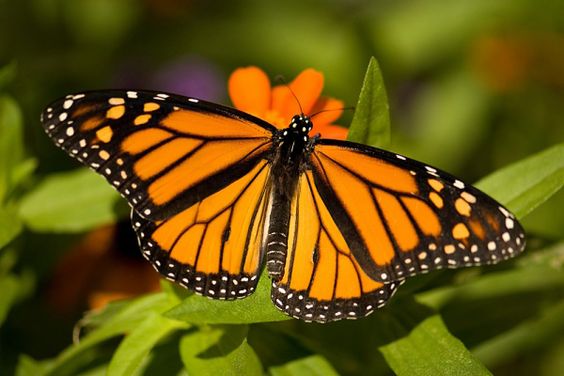 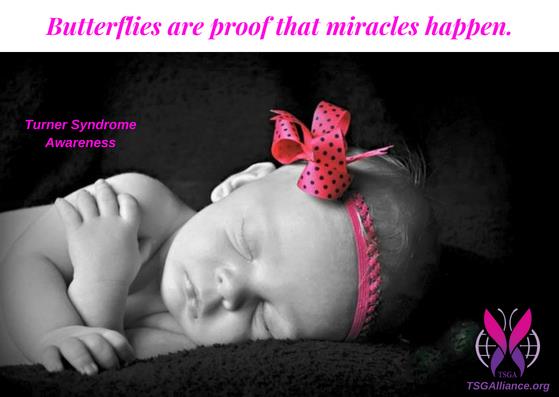 The butterfly is the Turner Syndrome symbol. The TSSUS chose the butterfly because thebutterfly is feminine yet strong, every butterfly is unique, and butterflies fly on their own which is our hope for our girls.

This is my Julie ~ she is a true Social Butterfly! 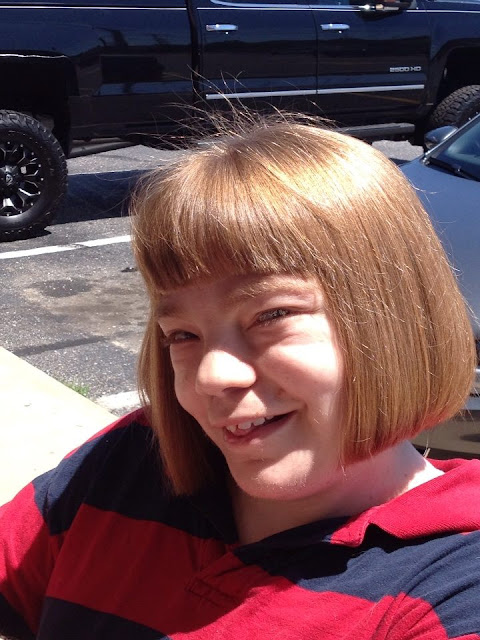 Where do I begin?  I had two miscarriages before I became pregnant with Julie.  Because of those two miscarriages, and the fact that my brother and his wife had numerous miscarriages, I asked my doctor to do a genetic study on both my husband and me to see if there was a reason there were so many miscarriages in the family.  The results came back normal for both of us and we were given the go ahead to get pregnant again, except this time the doctor wanted me on bed rest for the first three months.  When it came time to take the recommended doctor tests I refused because I had decided that I would accept whatever God gave us!  During my pregnancy I developed gestational diabetes and then, towards the end, pre-eclampsia and my platelet count dropped so low I had to have an emergency C-section at 37 1/2 weeks. 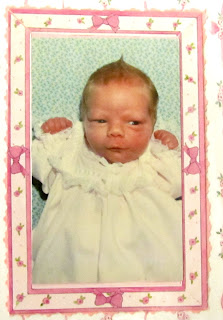 Julie's Baby Picture from the hospital

Because of the emergency C-section, the Pediatrician and a Neonatologist were present at delivery.  Julie had all the signs of a premature baby but the Pediatrician and the Neonatologist felt that Julie's arms were unusually short so they did a Chromosome Study on her because they thought she might be a dwarf.  We were not told about this test at the time, probably because it takes six weeks for results and they didn't want to alarm us as new parents.  Julie was born with a high palate, something that is common to TS girls, and that made feedings difficult and she would spit up through her nose.  At a few days old, she aspirated with one of those spit ups and she was put in the NICU (Neonatal Intensive Care Unit).  I was still in the hospital due to a staph infection but I wasn't allowed to hold Julie because of that infection and when I was released to go home, Julie stayed in the hospital!*  That was the worst!!  I begged my doctor to let me stay in the hospital so that I could at least look at her through the window, but he couldn't allow that.

* When she finally did come home, we still had issues with feedings and we took Julie to a specialist at Children's Hospital in Philadelphia (CHOP) and that's when the doctor realized that it was her high palate that was causing the problem.   He gave us a special bottle to feed her and that really helped.

When Julie was around 6 weeks of age, I got a call from the Pediatrician that he wanted Wayne and me to come in to speak with him.  At that appointment, we found out that Julie was born with Turner Syndrome.  We made an appointment with the Genetics department at CHOP and we were told that the best thing to do was NOT tell our families because they would treat Julie differently and that with some extra help she would catch up to the other children her age.  We knew we had to tell our families when my mother-in-law was watching Julie for us and she took her to my husbands old pediatrician because she thought the reason Julie wasn't growing was because I was starving her.  Of course our families had never heard of Turner Syndrome and didn't really know what to think.

I took Julie to Early Intervention where she was seen until she was 3 years old.  She got Speech Therapy and Occupational Therapy.  When she was 3 years old, she started at the Brick Pre-School Handicapped Program.  I also enrolled her in a Gymnastics program once a week.  Julie loved Gymnastics! 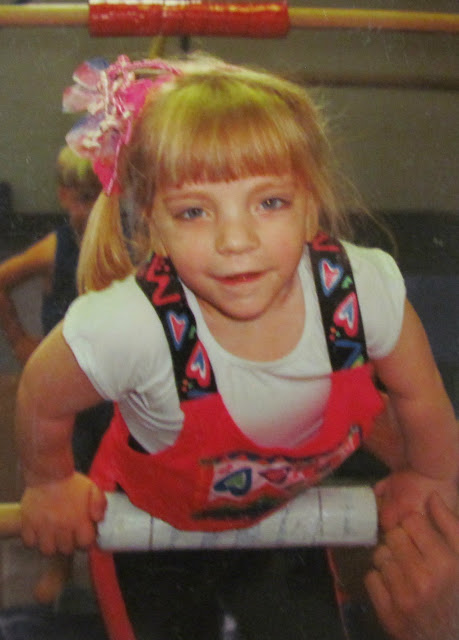 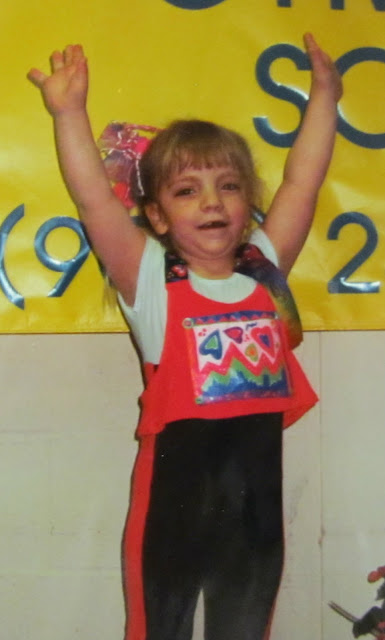 Julie had numerous ear infections that lead to sinus infections over the years, and they would take forever to clear up, which led to many operations to put tubes in her ears and also to her being on a daily dose of antibiotics.  When she was about 5 years old, she went to CHOP to have her adenoids and tonsils removed.  It was to be an overnight stay so my husband and I stayed overnight in the room with her as permitted by the hospital.  Unfortunately, the single overnight turned into a week long stay, with us not returning home until Julie could come with us.  She was in a great deal of pain and refused to eat or drink anything (a criteria for her to be released from the hospital) so, due to the amount of pain, the relief medicine kept being increased until her body started to shut down.  She was having serious congestion with associated breathing problems.  I insisted that a Respiratory Specialist come and see her because I feared it might turn into pneumonia.  They gave me some rubber paddles to pound on her back to get the mucus up and that really helped a lot. 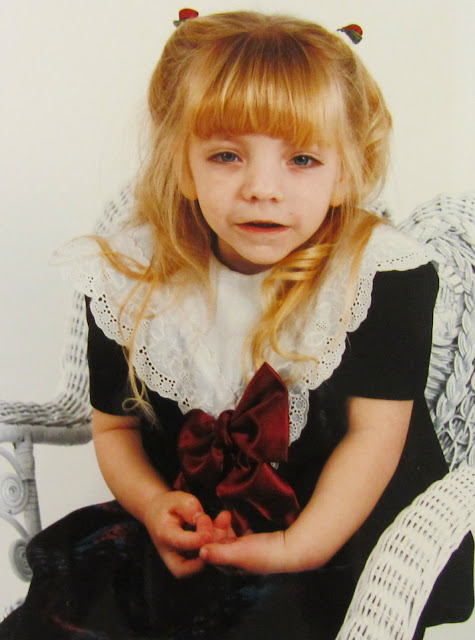 Julie grew very slowly so we started her on daily Growth Hormone injections at around 4 years of age.  At first, she grew pretty well with the growth hormone but then she stopped gaining height and started gaining weight.  At that point, we decided to stop the growth hormone injections.  An Endocrinologist at CHOP was seeing her at that time.  When we told him we wanted to stop the injections, he told us there was no need for us to come back to see him then.

When Julie was 8 years old, we had our other daughter Jenna.  Julie was a wonderful big sister!  She loved holding Jenna and was very gentle with her. 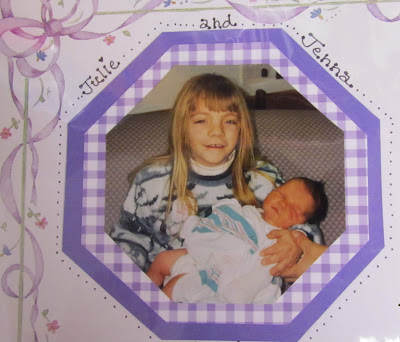 When Julie was around 9 years of age, the Brick School System felt they could no longer handle Julie and they got her into The Children's Center of Monmouth County.  She was at this school until she was 16 years old when they recommend that Julie would be better off to go to Bancroft Neurohealth.  Bancroft is a leading, non-profit, provider of specialized services for individuals with brain injuries, autism, and intellectual disabilities.  At that time, Julie had many autistic behaviors.  They accepted her into their program but that meant her moving into Bancroft and living on campus.  This was not an easy thing to decide; I wanted Julie to live home with us but Julie was becoming more and more aggressive and striking out at me and my husband.  Luckily, she never attacked Jenna.  But the day came when Julie got home from school at Children's Center of Monmouth County after having a bad day and, when she walked in the house, she bit my arm and wouldn't let go.  Jenna jumped on Julie's back to get her to stop biting me and that was it!  I told my husband that it was my job to protect my children, not Jenna's job to protect me from Julie, and so we made the hard decision to move Julie to Bancroft.  She still lives at Bancroft, now in the Adult Community in a Group Home with three other young ladies.  It is a great group home; all the ladies get along and the staff is wonderful.  But it wasn't always that way.  I had to fight for Julie's rights to make sure she had the correct placement.  When Julie went to live at Bancroft, we were very surprised when they said we had to sign over her medical support to them!

When it came time to start giving Julie hormone replacement therapy, we weren't sure what we wanted to do.  We knew that estrogen could cause breast cancer and we didn't have a good feeling about the growth hormone since it didn't really gain her any more height.  It just put weight on an already short body.  We were concerned about potential long term side-effects that might develop from the replacement hormone therapy.  We did asked Julie's doctors if she could go without estrogen.  I even asked my own doctors if she would be alright going without estrogen.  Not once did any of the doctors state that without estrogen Julie would get Osteoporosis at a young age.  At 31, she has serious osteoporosis equivalent to that of a 70 year old woman.  My feeling is that the doctors didn't know enough about Turner Syndrome to give us the proper advice and that they hadn't ever followed (long-term) a TS patient.  With the help of internet research and communications, we have gained more knowledge from other TS women than we ever got from the doctors.

Julie suffers from Irritable Bowel Syndrome and it can make her life very hard.  She has had many tests already.  She has had an esophagogastroduodenoscopy (also called an upper endoscopy) and a colonoscopy to see if she has Crohn's Disease, Celiac Disease, or some other problem.  So far they can't find anything wrong.  But she will have to be tested continually for these all the rest of her life.

Julie also has high blood pressure and will probably be on medication for that for life!

Julie is the sweetest person I know!  She never has a bad word to say about anyone!  She is very accepting of everyone and she doesn't notice differences in people.  I wish I could be more like Julie!  She is my hero!! 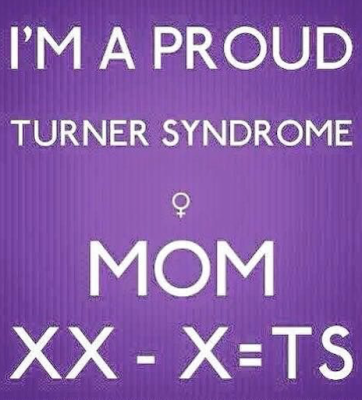 My "Rack Pack" Team 2017 with Julie, Jenna, Tyler and my great friend June. Julie was going to walk the 5K with us but several days before the walk she hurt her knee and wasn't able to, but she still came and waited for all of us to finish! 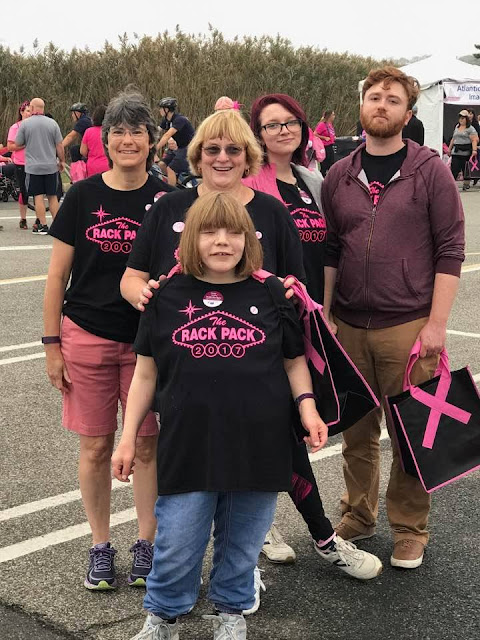 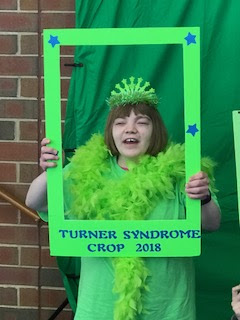 Julie on her 31st Birthday this past September!! 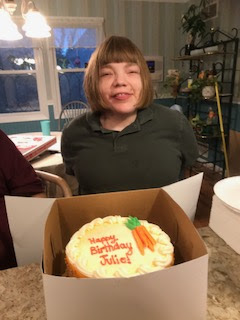 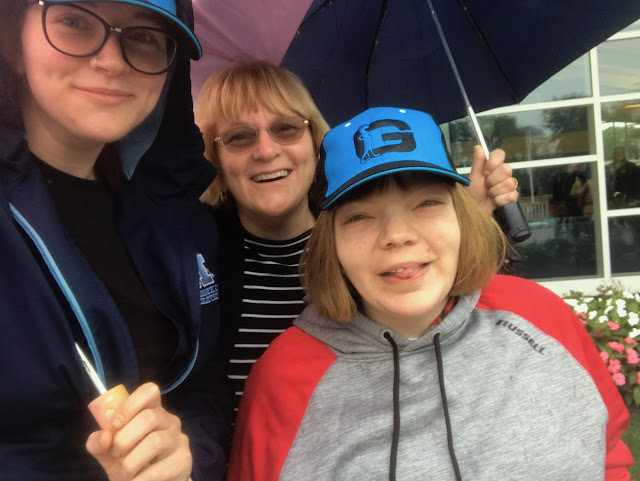 Julie with the Geico Gecko!! 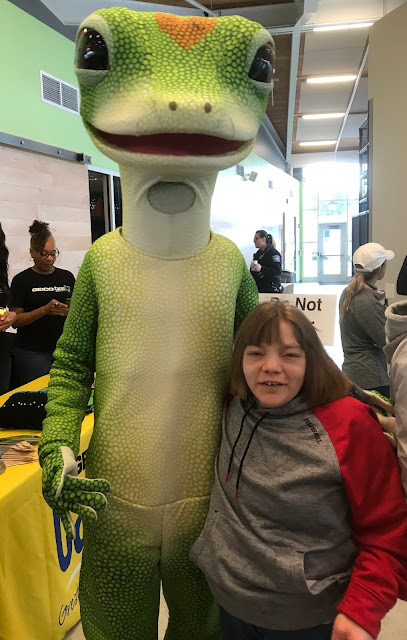 time to be silly: 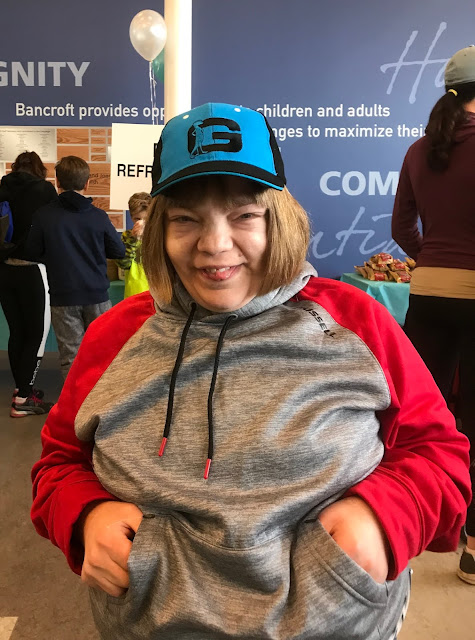 Julie and Jenna with the Geico Gecko!! 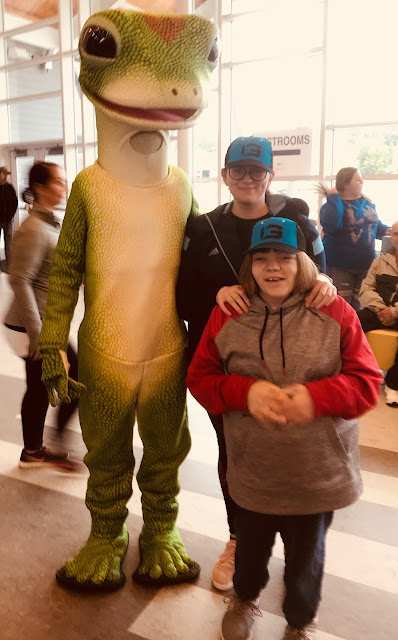 Julie with Wayne and Me 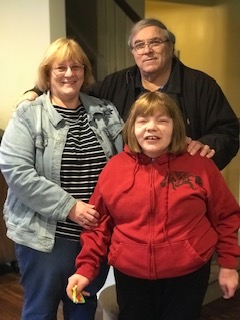 I am so very Thankful for my Miracle of Julie!! 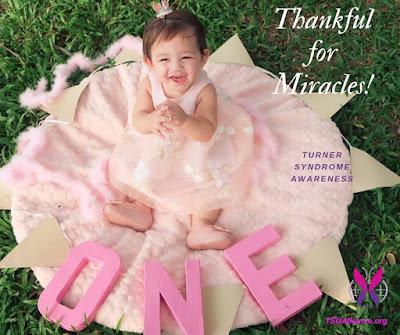 Thank you for participating in this blog hop!  I hope I have made more people aware of Turner Syndrome!  Hopefully the doctors will do more research so more questions can be answered appropriately! 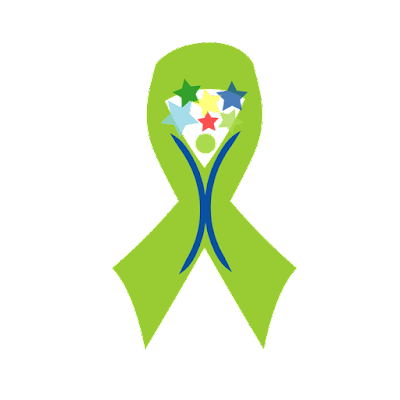 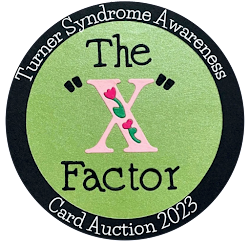 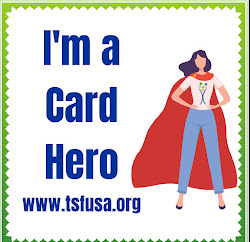 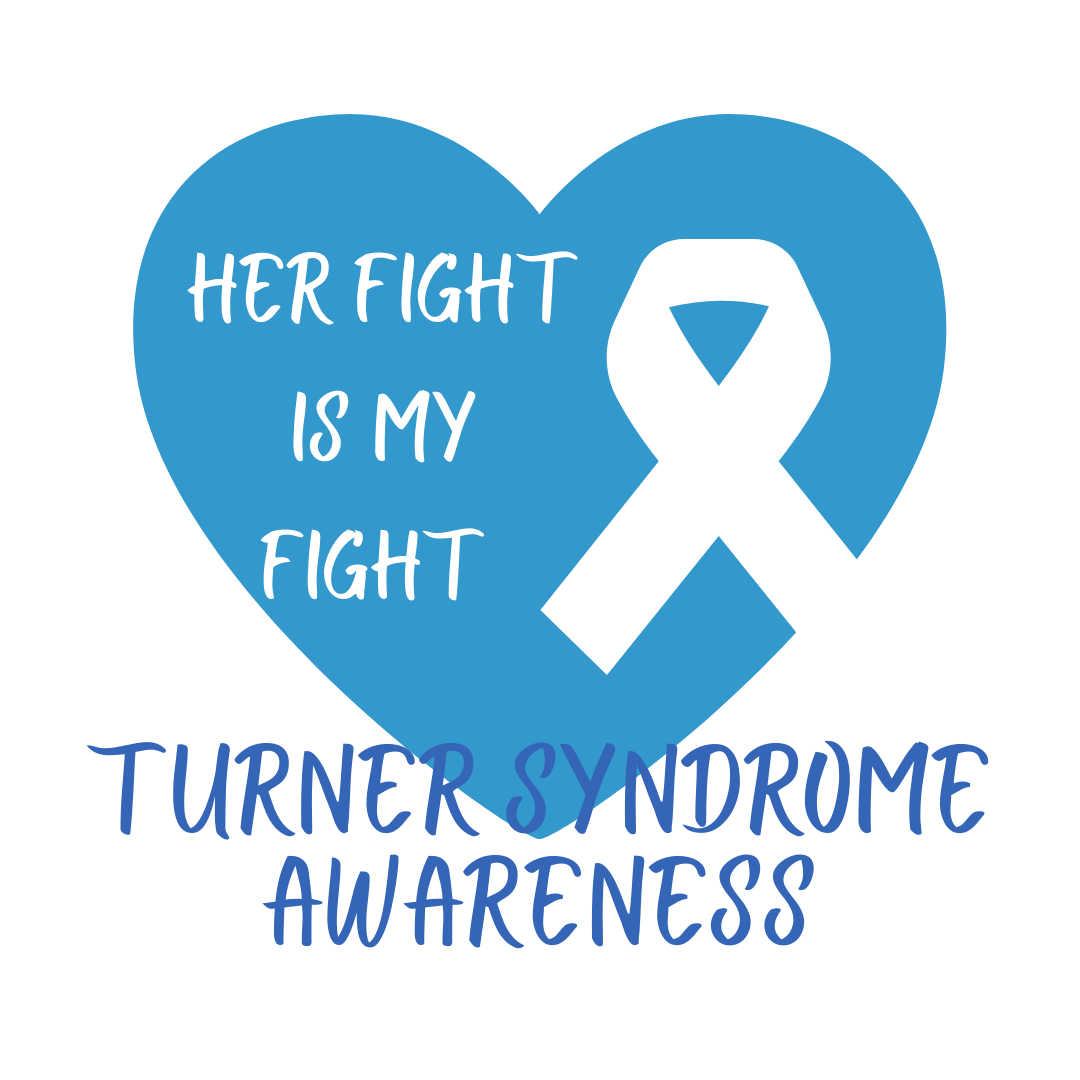 I'm A Hero For Turner Syndrome

I volunteer for the Turner Syndrome Foundation

I am a Proud Volunteer for TSF 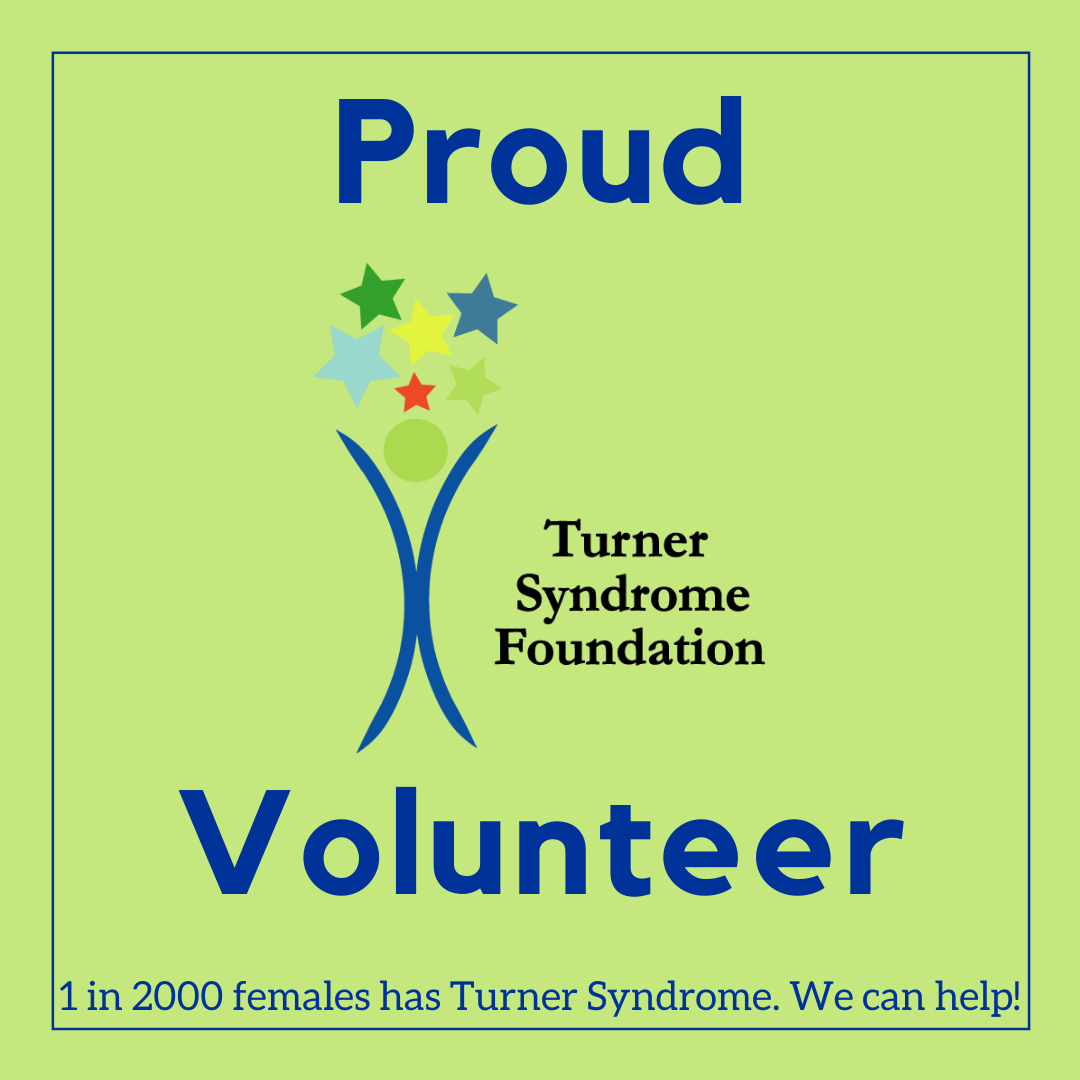 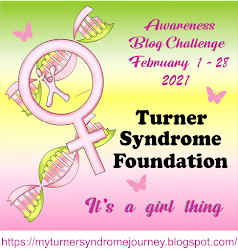 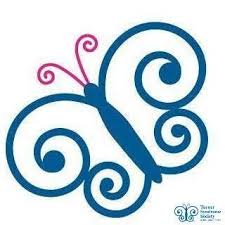 Turner Syndrome and the Butterfly

The butterfly has become the symbol for "Turner Girls". Just like a butterfly, they are considered fragile and beautiful miracles. Turner Syndrome may also cause a myriad of health complications, such as heart defects, learning disabilities and infertility, according to the Mayo Clinic. Sept 14, 2013.
Because it represents femininity, strength, and uniqueness, the butterfly was designated by TSSUS to become the Turner Syndrome symbol. "Butterflies fly on their own which is our hope for our girls."